How to cosleep safely

How to co-sleep safely with your baby

The practice of co-sleeping is becoming more and more prevalent in Western countries. Recent research conducted in the USA and Australia revealed that:

? 42% of two-week-old babies sleep in their parents’ bed.

? 27% of babies still sleep with their parents by age 12 months.

Despite the rise in bed-sharing, the practice has its detractors. Here are some of the pros and cons, to help you make up your own mind.

The pros of co-sleeping

Advocates of co-sleeping argue that it is natural and beneficial for baby, makes bubba feel safe and secure, builds a greater bond between parent and child, and makes it easier to breastfeed and settle baby during the night. Many parents who sleep with their baby report a greater sense of ease, knowing their child is always close. In addition, many advocates of bed-sharing believe that co-sleeping infants cry less during the night.

The cons of co-sleeping

A number of health bodies, including the highly respected SIDS and Kids, argue that sleeping with baby actually increases the risk of Sudden Infant Death Syndrome (SIDS) and fatal sleep accidents.

Instead of bed-sharing, SIDS and Kids recommends sleeping a baby in a cot next to the parents’ bed for the first six to twelve months. Nevertheless, the jury is out and there are conflicting opinions about the dangers of co-sleeping, with some doctors pointing out that cultures that traditionally practice safe co-sleeping enjoy the lowest incidence of SIDS.

If you do decide to share your bed with baby, here are a few tips to keep your child as safe as possible:

? Make sure baby sleeps on her back, not her tummy or her side.

? Make sure baby’s head remains uncovered during sleep. Don’t use a pillow, there’s a risk of suffocation.

? Do not sleep with baby if you are significantly overweight.

? Many experts believe you should not bed-share if baby was premature, had a low birth weight, or is less than four months’ old. Again, the jury is out.

? Make sure your bed has a firm surface, and use only lightweight blankets.

Still unsure? There is an alternative.

The decision to co-sleep is a highly personal one. Ask questions, do your research and, if you’re still unsure, you might prefer to walk the middle ground, and buy or hire a special bassinet, known as a co-sleeper, that attaches securely to the side of your bed. Baby will still be close to hand but he or she will also be on a separate sleeping surface. 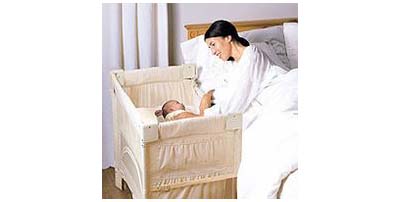